Anyone else have Mego characters growing up? I know this will date many of you as they were popular in the olden days (as my kids would say). I had an army of these from Marvel, DC, and Star Trek. I can’t even recall all of the characters I had but I had quite a few of them. Only a few survived and remain with me today. 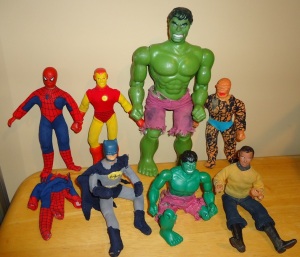 Pictured here are the lucky survivors. The regular sized Hulk has significant battle damage with both leg pins long fallen out. One leg remains as a reminder of his better days. The large Hulk is complete but rather loose at the joints. Batman had some custom work done when the gloves, boots, and cape were lost in battle. Iron Man, Thing, and Spidey must not have seen as much action as they escaped relatively unscathed.

Check out the Mego Museum web site – it’s a great reference for all things Mego, including some great Hulk stories and pictures.

2 Responses to Mego Survivors: Hulk and his motley crew