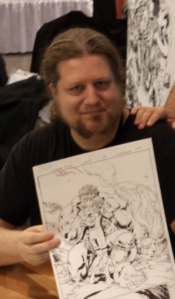 If you are familiar with Tom Raney, you already know that he is a fantastic artist. If you are an original art collector, you might be aware that he does not bring the art from his published comics to the conventions he attends. I was well aware of this fact as I have run into Tom at a few shows over the years and he has never had any pages. To my pleasant surprise, Tom was at Heroes AND had several portfolios of his original comic art with him at the show. I owe a huge debt of gratitude to fellow comic art collector Mike (off white) White who pointed out that he had been able to convince Tom to bring some art to the show for him to sell for him. I had met Mike at a show last year and after chatting with him briefly, he told me about all the great art that he had of Tom’s that was for sale, including some Hulk pages – I couldn’t get to Tom’s table fast enough.

As I scrolled through the books, I was looking for something very specific; pages from Hulk issue 613. I remember when the issue came out and how much I enjoyed the story and artwork. Immediately after reading that story, I started looking online for some pages but they were nowhere to be found. They weren’t with Tom’s art rep or anywhere else online for that matter. I gave up and just assumed someone had bought the lot of pages, never to be seen again. I couldn’t believe it when ALL of the pages I wanted were right there in front of me and after some discussions with Mike, a deal had been struck to buy them.

Click here and here to learn more about Tom’s art.

Below are thumbnails for larger images of the pages (I have included images of the pencils, inks, and colors for some of the pages). Hulk on the receiving end of a smashing punch from Red She Hulk and a 3 page sequence where Hulk finds out that he has another son. A huge thanks to Tom and Mike for allowing these pages to come home to this Hulk fan!